I was an undercover tamale cart last weekend - hauling a huge, gleaming pot full of cornhusk-wrapped masa + delicious fillings all over town.

Well, to two parties. But I'm trying to sound important. 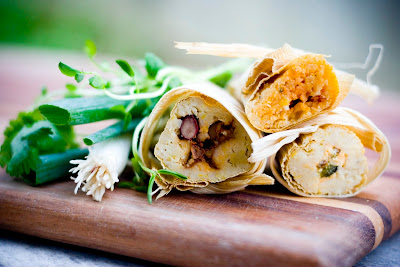 So we've done soy chorizo - we've done mole seitan - and this time, there were three: Mole Tofu + Bean (vegan+gluten free, hooraaay!), Jalapeno Popper and Kimchi-Cheddar. Once you've got the masa situation handled, it's easy to do multiple fillings - especially simple ones, like kimchi/cheddar and pepper/cheese. Mole, as I'm sure you know, takes a whole lot longer. 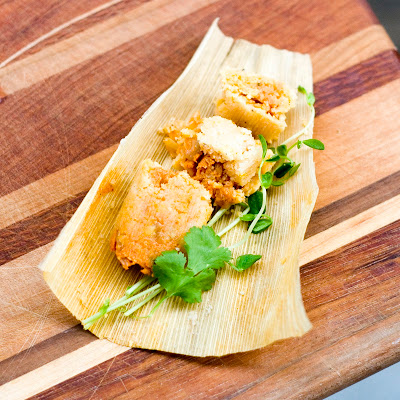 A small, shameful hiatus was taken from my summertime veganism in the name of the Holy Combo. And Hail Mary, was that sucker good. But my favorito tamalito, to be sure, was the Jalapeno Popper. 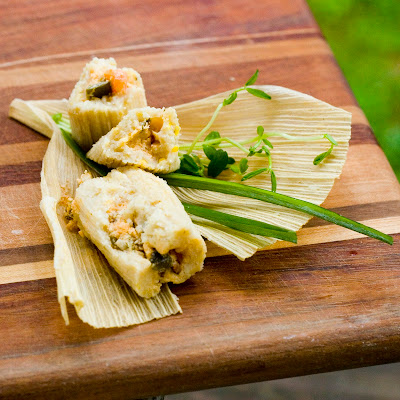 I know it doesn't look like much but TRUST A SISTA that thing was killer. The peppers infused the masa with spicy aromatics - I used a combo of pickled jalapenos and charred poblanos, all fiery and delicious - and the cheese, while steaming halfway out of a few of the tamales and making the pot a bit messy, saturated the masa with tartly salty awesomeness.

I'll be trying this vegan-style with cashew cheese in the near future. I think they could be the bad-assest, healthiest tamales ever known to man. Remains to be seen.

Onwards! Into the Abyss!

Char your poblanos over a gas flame or under the broiler until their skin blackens. Toss into a paper bag to steam.

Shred your cheddar into another bowl. Chop your jalapenos and herbs and add - then add minced poblanos and cream cheese. The heat from the roasted peppers will thin your cream cheese a bit - mix everything well and taste for salt, add if needed. Stick in the fridge to chill while you prepare the masa.

Mix your masa, salt, baking powder in a large bowl. In a food processor, pulse your broth, corn and roasted garlic until nice and pulverized - add to the masa and mix well.

Whip your shortening in a small bowl and fold into the masa.

Soak your corn husks in warm water for about ten minutes. Choose 5 of the wimpiest ones to tear into strips for tying.

My steamer set up is kinda strange, but this is how I do it - I place a small quiche pan, face down, in the bottom of a large pot and boil 3 cups of water, which I pour into the pot, reaching almost to the top of the quiche pan, which I then sit a large strainer on top of to hold the tamales. The water cools a bit as I make the tamales, but it prevents mess later, as you'd have to try and pour hot water around the huge pile of tamales waiting to be steamed in your pot.

Take about a half cup of masa and press it into a husk, going for a rectangle shape, at the top of the husk, center. With a spoon, lay about 1.5 tablespoons of filling in the center of the masa. Pick the husk up and peel one side of the masa away from the husk, letting it curl around the filling, then wrap the husk in a cylinder and fold the bottom up, forming a package open at top.

Tie in the middle with a torn piece of masa. Sit in your strainer/steamer, open end up.

Repeat until your masa is adios. Tuck remaining soaked husks around the tamales, saving three to drape over the top of the pile, edges tucked in. This'll help retain steam.

Cover your pot with a lid and a towel, turn heat to high, and as soon as you hear boiling activity, reduce heat to medium-low and simmer for an hour. 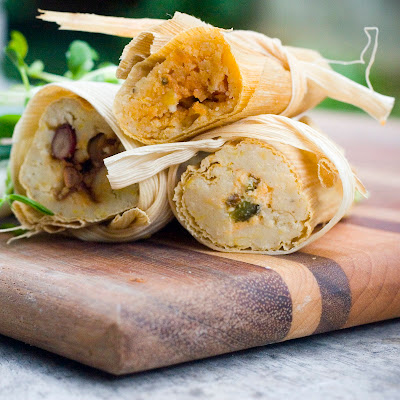 Probably one of the best beer-accompaniers EVAR, fresh, warm tamales. 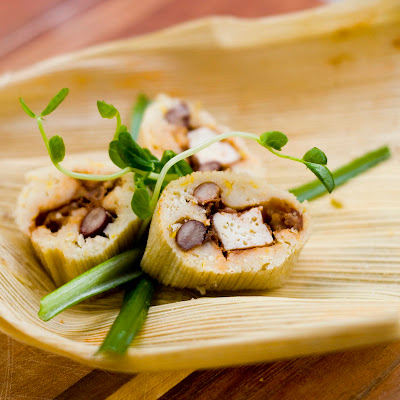 The tofu mole ones were a hit as well, so don't let their lack of cheese scare ya. Just make a half batch of this sauce, toss with a can of kidney beans and some pan-fried tofu, and use the masa recipe above - but increase your filling to 2 tablespoons per, to account for tofu and bean content.

Ah, summer.
Posted by julialikesred at 10:11 AM

NFP in the media 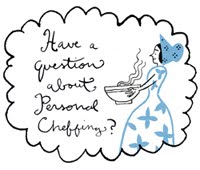